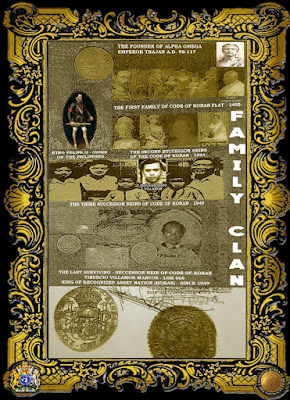 CERTIFICATE OF REGISTRATION – The British Royal Family, England
Know to all men by these presents,
By virtue of the powers vested to me as Queen of England and Chairman of the Committee of 300, I, Alexandra Elizabeth Mary Windsor II with Royal Codename: GB Windsor II and Iron Gold Lady together with HE Sec Gen. Jean Marc De La Sabliero of the United Nation Organization, HE Pres. Shi Jiuyong of the International Court of Justice, HE Pres. Paul Wolfowitz of the World Bank Group, HE Gov. Rafael B. Buenaventura of Bangko Sentral ng Pilipinas, HE Pres. Ricardo m. Tan of the Philippine Deposits Insurance Corporation, HE Pres. Sheik Ahmad Fahad Al-Ahmad Al Sabah of the Organization of Petroleum Exporting Countries (OPEC), HE Atty. Vernette Umali-Paco of the Securities and Exchange Commission, HE Chair Marsh Carter of the New York Stock Exchange, HE Chair Jose Vitug of the Philippine Stock Exchange and HE Dir. Pascal Lamy of the World Trade Organization hereby vested this Certified Registration to wit:
1.) For Bank of ASBLP registry no. WB – 12005 – ASBLP – 12
2.) For ASBLP Group of Companies registry no. BRF – 12005 – ASBLP – 10
3.) For Philippine Dollar Printing registry no. ASBLP – 1975 – PD – 01
4.) For OPEC Membership and Oil Production Operation registry no. OPEC – 12206 – ASBLP – 05

Sealed at the Buckingham Palace, London, England this 13th day of August 2005 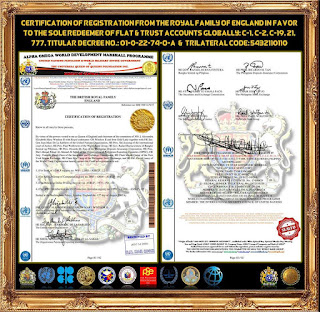 
TVM-LSM-666 IDENTIFICATION AS THE OVERALL CHAIRPERSON OF THE TRILATERAL COMMISSION.

KNOW ALL MEN BY THESE PRESENTS:
BY VIRTUE OF POWER VESTED BY THE ALLIED NATIONS. TIBURCIO VILLAMOR MARCOS (TVM) IS REGISTERED IN TRILATERAL SOCIETY OF GLOBAL FUNDER WITH TRILATERAL I.D. NO. 5432110110, TITULAR DECREE 010-22-O-A, REPUBLIC ACT 5445-54 REGISTERED IN THE SEVEN BOOK AND SEVEN SEAL AUTHOREST UNDER THE TWELVE TABLES AND TWELVE EMPERORS OF ROMAN LAW BY JUDGE SHERMAN. THE NAME LEO STEVE MARCOS (LSM) IS REGISTERED IN THE BANK INTERNATIONAL SETTLEMENT WITH LSM SECURITY CODE 11011233451-888 PROTECTED BY TREATY OF PERPETUAL RELATION CR. 1949 FOUNDER OF SEVENTH WHITE STALLION, RECOGNIZED BY THE WORLD ORGANIZATION AS THE OWNER AND SOLE SIGNATORY OF THE WORLD MUTUAL TRUST DEPOSIT AND UNDERTAKING THE CODE OF KORAN-FLAT – AAA – 777 –MCD BEARING A DIPLOMATIC AND CONSULAR MINISTER – OWNER ART. 426, 427 AND 428. 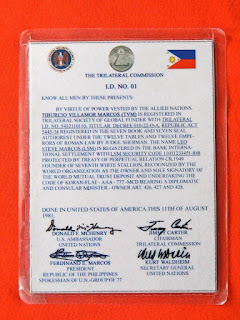 
DECLARATION OF THE LAW OF TREATIES FOR CODE TVM-LSM-666 CR. 1949. UNITED NATIONS CONFERENCE ON TRADE AND DEVELOPMENT (UNCTAD)
TAKENOTE:
That this Declaration, covered by the Law of Treaty of Perpetual, assignment without let of hindrance as a clause of his vital documents issued by the Court of Pasay - Order Republic Act 26, adopting and authenticated in the Ministerial Meeting, the person stated expressing the consent of the State to be bound by the Treaty for accomplishing of any other Act of International Banking Law of Bailment. 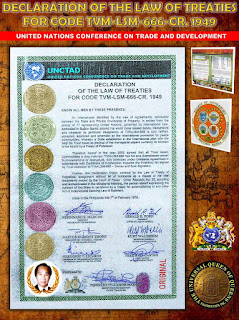 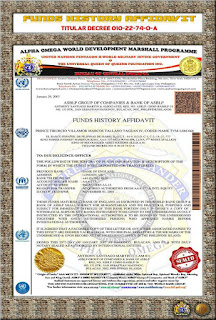 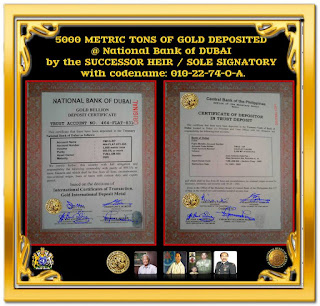 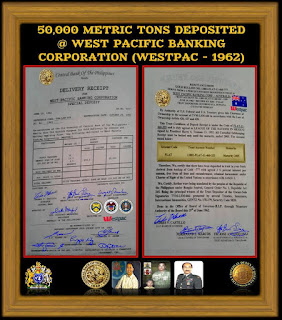 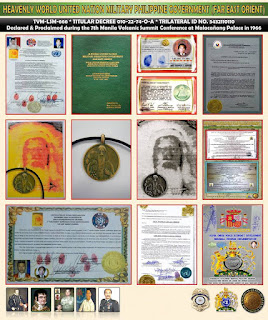 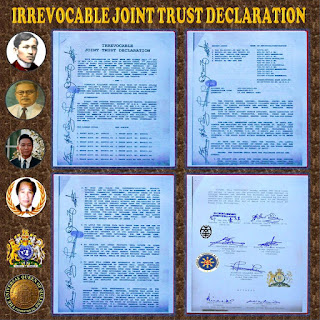 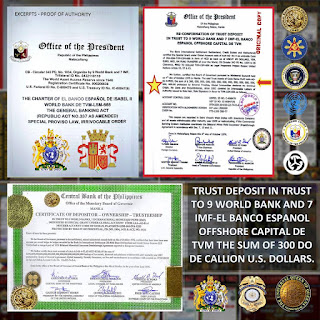 CERTIFICATE OF ENTITLEMENT - UNDER THE PROCLAMATION OF GIFT OF LOVE CR, 1949
With Special Trust Deposit Agreement through the International Banking Law Bailment Provided Under U.C.C. Section 2 – 403 (C) (Chapter 19) amended in The Board of Governor Annual Meeting 1976
and The Monetary Authority, Manila, Philippines

We, the Chairman of the Board of Governor, Central Bank of the Philippines and the Monetary Authority, the President of the Republic of the Philippines, His Excellency President Ferdinand Edralin Marcos, His Excellency President of the United States of America Gerald R. Ford, The President of the General Assembly of United Nations Honorable Gaston Egmont Thorn, Her Majesty Queen of England Elizabeth II – Head of Trilateral Commission of Global Funder, Honorable Chief Justice of Supreme Court Fred Ruiz Castro, Trust Depositor of TVM Fr. Jose Antonio Diaz alias Severino Sta. Romana and Associates.
The “ABL-YD CR NO. 990158, 990158, 9901588 AAA Certified and re-confirmed that there has been an AU Metal Grand total of  ONE BILLION, ONE HUNDRED EIGHTY-ONE MILLION, THREE HUNDRED THIRTY-SIX THOUSAND, SIX HUNDRED FIFTY-SEVEN (1,181,336,657) Metric Tons, Precious Stones and Real Estate Property covered by O.C.T. 01-4 consisting of 7,169 Islands and Islets under the umbrella Code Account 010-22-74-0-A-TVM-LSM-666 deposited in Trust in different bullion banks around the world intended to backup the managerial paper currency under General Order No. 1 in accordance with Republic Act. 265 of Central Bank of the Philippines adopted in the International Banking Law of Bailment.Since 1950, established the C-1-C-2 19-21-777, and the Proclamation of the Decree 168 for ABL Program, printed demonetized Philippine Currency NOTES inside and outside the Philippines, were the Group of the Board of Governor recognized by the fund committee by the major international financing Institutions led by the World, International Monetary Fund (IMF), U.S. Federal Reserve and the U.S. Treasury. 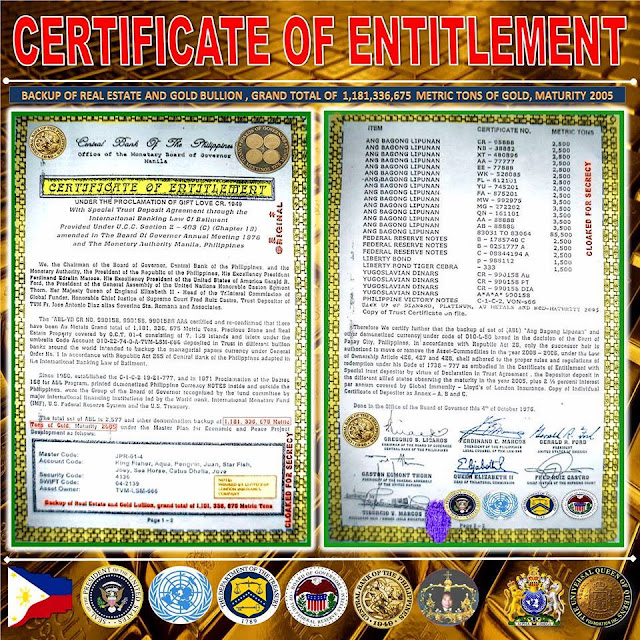 
The Statement of the Central General Order No. 1

THE STATEMENT OF THE CENTRAL GENERAL ORDER NO. 1

Whereas, the King Felipe II, King Ferdinand VII and her majesty Queen Isabel II, as absolute ownership of the Hacienda Filipinas covered by O.C.T. 01-4 with 7,169 Island and Islets, 1565. EL BANCO ESPANOL DE ISABEL II, the first Bullion Bank established August 1, 1851, and the sole founder of the Central Bank of the Philippines established January 3, 1949, 40% share of stocks the Filipinos and Government, 60% for the EL BANCO ESPANOL FILIPINO OFFSHORE CAPITAL TVM-LSM-666

Whereas, the EL BANCO ESPANOL OFFSHORE CAPITAL, represented by the only successor heir for a time being supported his asset and commodities in trust to Central Bank of the Philippines, covered by several treaties, TVM-LSM-666 as umbrella code account in special to open the vault to vault and ledger to ledger with export permit to expanded the commercial bank around the world, but the Central Bank of the Philippines is only … manager and duly responsible of this trust in trust the following item to wit:

Whereas, these asset duly agreed 1% interest per Annum effective in the year 1950 plus 60% Lion share for TVM-LSM-666 as successor heir in interest of the sole ownership of the code of KORAN FLAT – EL BANCO ESPANOL DE ISABEL II OR EL BANCO FILIPINO OFFSHORE CAPITAL.

Whereas, the EL BANCO ESPANOL illegally used by Antonio De Ayala and Family, known as Bank of the Philippine Island (BPI) the heir is to implement the trilateral Act no. 61 and the embargo Act 1807 After Maturity.

Whereas, the EL BANCO ESPANOL OFFSHORE CAPITAL have been organized 77 prime commercial banks around the world have been liability of trust assets maturity 2007…2% interest per Annum, 2007 up dated to balance sheet withdrawn for implementation … transfer plan duly committed 22 head of state… MEXICO October 4, 1982.

Whereas, the EL BANCO ESPANOL OFFSHORE CAPITAL – LSM-666 duly registered in the Bank International Settlement, such as Trilateral Nations, U.S. Federal Board of Governor System, International Monetary Fund and the World Bank, approve October 4, 1976, and the Board of Governor of the Central Bank, upon receipt of final guidelines and other corresponding documents PANOL-TVM-LSM-666, authorized to withdrawn and deposit any affiliated banks around the world where his assets is located. TIBURCIO VILLAMOR MARCOS is SOLE OWNER/SIGNATORY of all trust lodged in Trust Maturity 2007.

Whereas, under section3, this certificate of authority to operate the offshore banking system, contributing the world economic problem for a time being comes, and other relevant factors since the US President G. Washington CR. 1790, 1902, 1932, 1942, 1972 the Gold Bullion as the principal backup of all legal tender governed by the law of traties ended 2007.

Now therefore, I FERDINAND E. MARCOS, President of the Philippines, by virtue of the power in me vested by the constitution, do hereby adapting and proclaim the EL ESPANOL OFFSHORE CAPITAL for the purpose to help the world economic development programmed of action in accordance with International Banking Law of Bailment, Sec. 7, 10, 11, the Philippines Banking Sysytem Sec. 1 and Sec. 4, Rep. Act No. 6426, PD No. 1034 and PD. No. 6426 is amended.

Done in the Office of the Monetary Board of Governor 11th of August in the year of our Lord 1974. 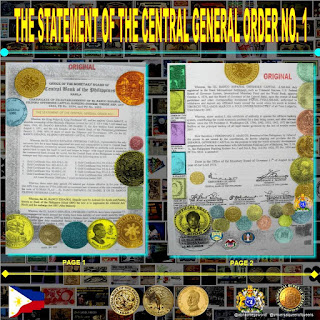 CERTIFICATE OF ENTITLEMENT: 2nd Paragraph states, that: The “ABL-YD CR NO. 990158, 990158, 9901588 AAA Certified and re-confirmed that there has been an AU Metal Grand total of 1,181,336,657 Metric Tons, Precious Stones and Real Estate Property covered by O.C.T. 01-4 consisting of 7,169 Islands and Islets under the umbrella Code Account 010-22-74-0-A-TVM-LSM-666 deposited in Trust in different bullion banks around the world intended to backup the managerial paper currency under General Order No. 1 in accordance with Republic Act. 265 of Central Bank of the Philippines adopted in the International Banking Law of Bailment, (1976) 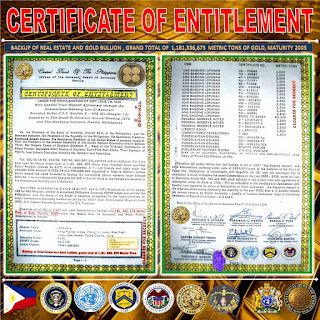 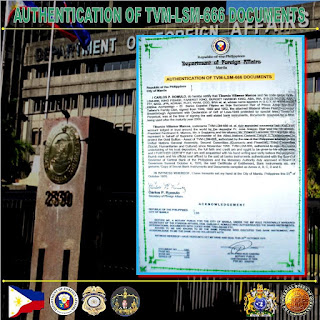 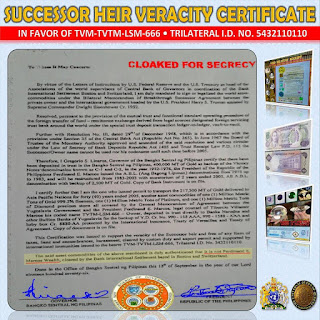 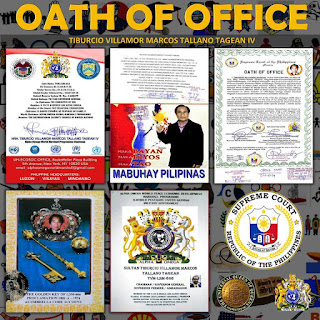 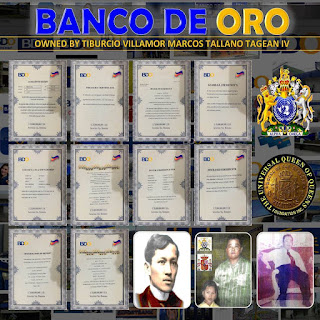 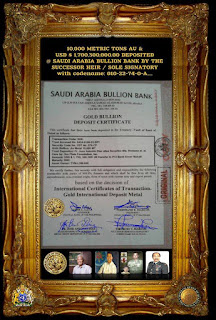 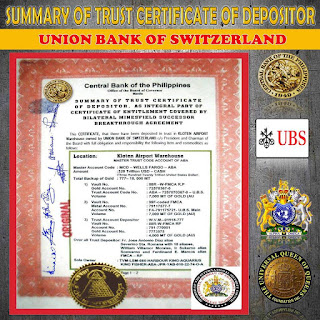 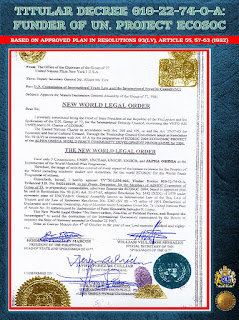 CASH CERTIFICATE OF TRUST DEPOSIT - In Trust To Barclays, bearing the Trilateral ID. No, 5432110110 as the ASSET OWNER and below the signature of HRH. TVM is his Code Name bearing his TITULAR DECREE 010-22-74-O-A. 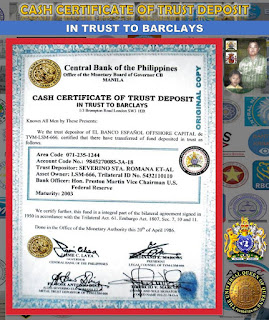 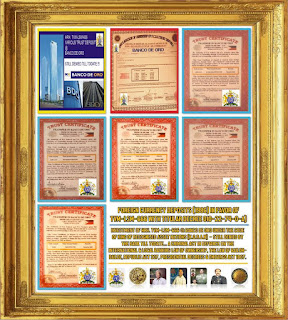 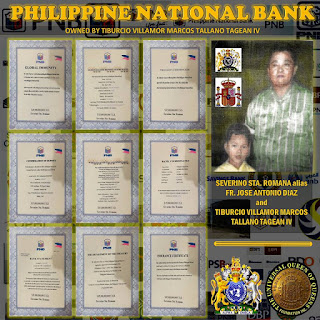 THE CHARTER OF EL BANCO ESPAÑOL AND HIS SUBSIDIARY OFFSHORE CAPITAL WITH SUPREME COURT RULING OF JANUARY 1984 CB CIRCULAR NO. 343 SECTION 14 OF THE REPUBLIC ACT 6426 - TITULAR DECREE 010-24-74-O-A 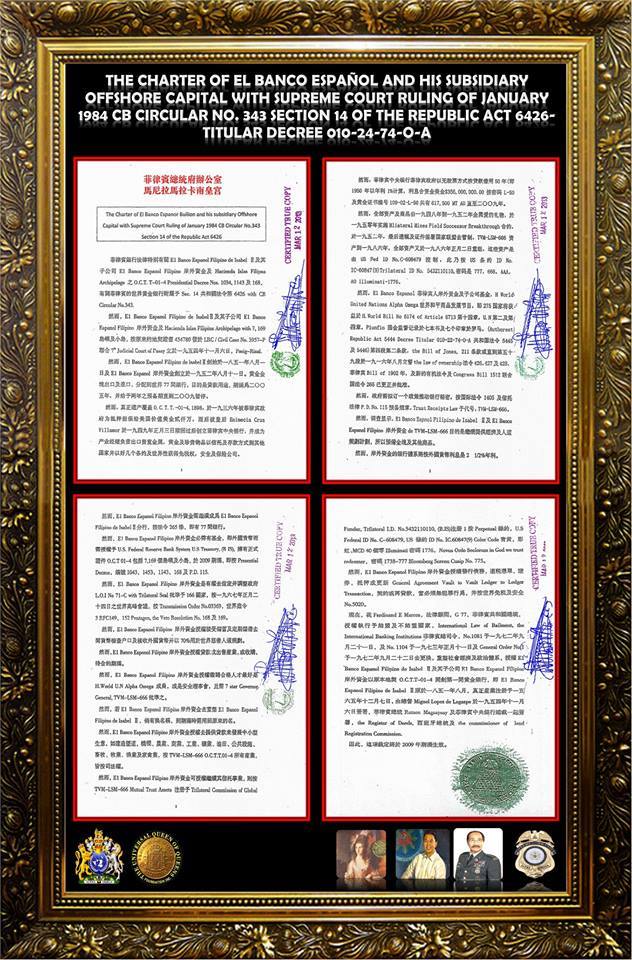 ALL OF THE LIST OF DEPOSITOR, ANY PAPERS PRESENTING THEREOF WITHOUT CLEARANCE FROM TVM 7TH STALLION AAA-777-MCD AS SOLE SIGNATURES BY VIRTUE OF MEMORANDUM OF TRUSTEESHIP AROUND THE WORLD, WILL BE DECLARED NULL & VOID !!! 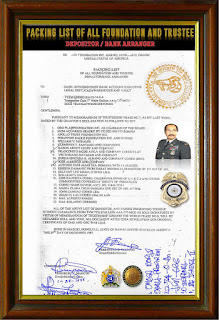 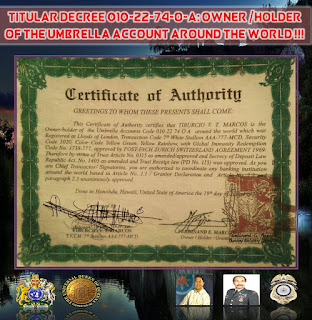 
MEMBERS OF THE BOARD OF TRUSTEE OF THE GROUP OF TRILATERAL COMMISSION OF GLOBAL FUNDER (1981) - granted & justified Code: LSM-Apha Omega Titular Decree No. 010-22-74-O-A in accordance with Republic Act. 5445-54 under the Seven Book and Seven Seal Authorest. 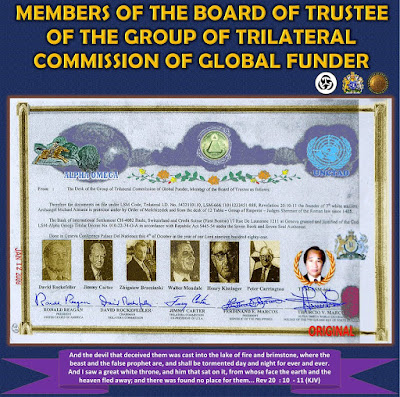